skip to main | skip to sidebar

I stopped to get gas on my way home from work, just like any other day.  These tales always begin just like any other day, you know.  The summer heat wave was reaching another crest, rolling in with the kind of sweltering air that awakens and angers things... dark, creepy things.  Actually, the heat makes me pretty grumpy, too, so I can sympathize.

While I was standing by my car, waiting for the small tank to fill up, I noticed a few of the armored-looking, grey bugs that have been plaguing our area for the past few summers.  They seem to always be thick at this particular gas station, so it was nothing out of the ordinary to see a few of them flying around, displaying their insectoid intelligence by bouncing off the triple-bypass burrito ads atop the pumps.  But just as I was wishing the tank would fill up faster so I could get out of there before any of the bugs flew closer to me, one flew into my shoulder.  Slightly panicked, but fairly sure the bug had already moved on, I began brushing at my shoulder and trying to use the windows of my car to catch a reflection of my back so I could be sure I had no hitch hikers.  About the time I was convinced that nothing was crawling down the collar of my shirt or hanging out in my hair, the pump clicked off and I collected my receipt and made for the safe haven of my car's cool interior.

In what I can only assume was a dastardly conspiracy conceived by evil plotters in some secret lair, at the exact moment when I opened the door to my sanctuary on wheels, one of the vile, armored bugs flew in and plopped down on the threshold, barring my entry.  Pausing to gather myself for the offensive as much as to wait for my brain to begin functioning after the moment of sheer terror that had flash frozen it, I struck out with my only available weapons: my trusty credit card and the gas receipt.  My credit card has stuck by my side through many late night bouts of ill-advised shopping, but it was no match for the steel-nerved bug.  The bug merely laughed in its shiny, plastic face, causing my insides to quiver.  As I was rallying for a second pass with the card and receipt, another iron-sided bug made a successful landing on the car door and set about entrenching itself in the gap between window and door.

I instantly realized that the bugs which had, moments before, seemed so stupid, flying into and bouncing off of signs, had actually staged that as a ruse to lull me into a false sense of security.  They were, in fact, evil geniuses.

I knew that I had mere moments before thousands of the grey bugs would fill the sky and swarm over my car. 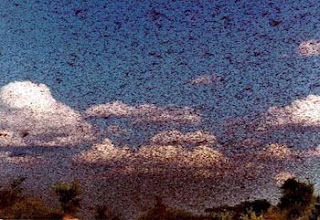 I resumed my shaky onslaught against the armored nightmares, my nerve deteriorating rapidly.  I would be stuck at that gas station forever, blocking the pump while more sensible people honked their horns and wondered why the crazy girl was waving her arms and wailing about two harmless little insects. 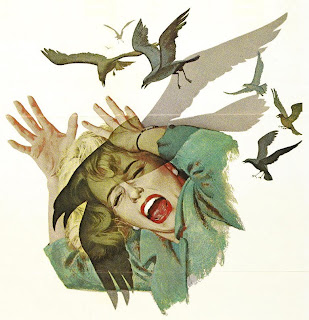 When I had lost all hope of ever seeing home, I heard a voice break through the terror-induced darkness: "Those pesky things are over here, too."  Another car was being filled up beside mine, and waiting patiently at the pump, was a man wearing a ball cap and mirrored sunglasses.  Through my terror-stricken eyes, he was transformed to a knight, armor shining in the sunlight, his trusty steed munching away with its nose in its feed bag.

Mustering what little sanity I had left, I cried out, meekly, "I'm terrified of these things, and there are two of them in my car."

The knight was at my side in a instant, and had drawn his sword against the evil, monstrous insects.  Outside of my warped reality, the man in the ball cap had walked over to my car and was using his keys to pry the bug out of the space between the window and door.  In what would have been a very anticlimactic fight scene, he knocked the bug out almost immediately.  Relieved, but aware that one yet remained, I beseeched the knight, "Thank you!  Would you mind terribly getting the one that's just down there, as well?"

He obligingly grabbed the offensive insect with his bare hands (in actuality, just a couple of fingers) and removed it from the threshold of my car.  "Those stink bugs are sure annoying, aren't they?" he said.

"Oh, thank you, so much!" I exclaimed.  "You have no idea how much I appreciate it!"

And just like that, the knight, having bested the terrible beasts, jumped upon his steed and rode off into the sunset.  Reality flooded back into the still terrified reaches of my brain, and I hopped back into my car and slammed the door before any more bugs could try to tag along.

Thank you, sir, in the ball cap and sunglasses.  I have recovered from my mental lapse now, but I'm sure you saved my life yesterday!
Posted by heather1of1 at 12:21 PM 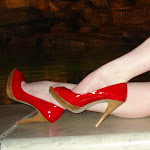